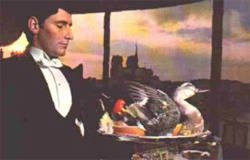 It all began in 1582 in a small inn just outside of Paris on the banks of the Seine, near the southwest tower of the Chateau de la Tournelle.

The tower was constructed by Charles V to fortify the existing defences of Paris and was made from Champenoise stone which due to its' high mica content would glitter in the sun and became known as the Tour d'Argent ( Silver Tower ).

On the 4th of March, as three gentlemen from Florence sat in the Inn of the Tour d'Argent, a group of nobles arrived unexpectedly and amongst them was Henri, King of Poland and France, the third of his name and last of the Valois. "He had a noble look about him, dressed in brown velvet with a ruby aigrette in his cap, rings on his fingers, a long gold chain with the famous Medallion of Musk, a fine sword and the Order of the Holy Spirit".

Smartly the inn keeper Monsieur Rourteau sent his boys scurrying off to the kitchen to prepare a meal fit for the King.

The meal began with pressed roe of red mullet, pickled herrings and wine from Arbois, Lyonnaise soup and pork crackling with onion sauce. As the kitchen crew were hard at work with spits turning, sauces bubbling, spoons stirring and cleavers chopping, Rourteau looked with a satisfied smile into the dining-room to see the King deep in animated conversation with face aglow.

Now the King had suddenly fallen silent! For a moment Rourteau pondered what may be amiss? No, it was something at the neighbouring table that was intriguing him.

The Italian gentlemen were not touching the meat with their fingers, but rather using strange pointed instruments that their valets had taken from small sheaths. They were using these instruments to spear their meat and daintily put it into their mouths. "Gentlemen, what are these things?" - asked the King. A hush fell over the room as he spoke.

"It's a new invention Sire called a fork," said one of the Italians. "It comes from Venice and is very useful as you can see."

With one last glass of Cognac this monumental meal came to an end and the King promised to have some of these instruments made and to return with the finest company in the French court to inaugurate them. This was how the fork came to France!

Since that time the Inn of the Tour d'Argent became a meeting place of noblemen and courtiers and over its long history has hosted notables and royalty from Philip II of Spain, Catherine de Medicis, Czar Alexander III and Cardinal Richelieu to Lauren Bacall, Humphrey Bogart, Prince Charles, Bill Clinton and Mick Jagger......

As we sat after a sumptuous lunch above the Quay de Tournelle on Jim's 50th birthday gazing over the roofs of Paris with magnificent views of the Seine and Notre Dame the incredible sense of history and dedication to the art of gastronomy left us beyond words.